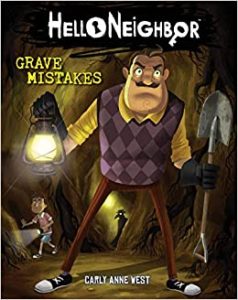 As construction begins on the Golden Apple Amusement Park, Aaron Peterson is becoming increasingly worried about his father. Working late nights in his study, Aaron’s dad seems to be fraying at the edges-pushing, and sometimes breaking, the laws of engineering with his new schematics. And with the added pressure he’s under to complete the park by this summer, Aaron can’t help but feel his father’s inventions are doomed to end in tragedy once again.

But his fears over his father’s work are complicated by a dark discovery: a network of tunnels running underneath the town of Raven Brooks. Where do they lead? And what dark secrets about his family’s past will he uncover there?

Don’t miss this newest installment in the Hello Neighbor series, which features blueprints and secret documents throughout, to help readers unwind the mysteries at the heart of the games. 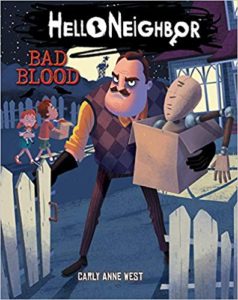 The Hello Neighbor story takes a twisted turn in this all-new prequel series, based on the hit horror video game from tinyBuild!

Aaron Peterson has never had it easy. As the son of a famed and eccentric theme park designer, his life has been one move after the next as his father chases new jobs in countries around the world. Aaron has watched rides and attractions of all kinds start with a blueprint on his father’s desk, and end up a towering, larger-than-life creation to marvel park-goers.

That is… until something really, really bad happened on his dad’s latest job in Germany. Something worse than the accidents that had happened before. Something that Aaron and his family are desperately trying to forget.

With the family on the run from legal trouble and out of money, Aaron’s dad takes a job designing a theme park in his hometown of Raven Brooks. The strange small town holds its own share of secrets… including some that Aaron’s father would prefer stay buried.

This explosive new prequel trilogy explores the rise and fall of the Peterson family like never before! Found documents throughout help readers unwind the many mysteries at the heart of the hit game. 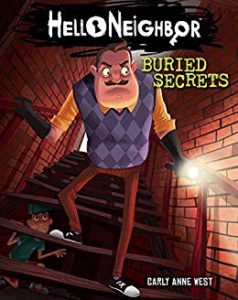 Don’t miss the thrilling finale to the Hello Neighbor prequel trilogy, based on the hit video game from tinyBuild!

Nicky Roth should be happy–he’s finally proven that his best friend, Aaron, and Aaron’s younger sister, Mya, are missing. Better yet, the police are actually doing something: they’ve plastered the town with missing posters, and have organized weekend search parties for the kids. But Nicky can’t seem to pry his eyes from the house across the street, especially after he sees a frantic SOS coming from Aaron’s room in the Peterson house. After what happened in the winter, and the warnings they got from their parents, Nicky’s friends insist they can’t help him investigate his neighbor anymore. If Nicky wants to find out what’s going on in the Peterson house, he’s going to have to do it alone.

Don’t miss the electrifying conclusion to the Hello Neighbor official prequel trilogy, which includes two-color illustrations throughout to help readers unwind the mystery at the heart of the game.

Now Available from your from your Local or National Retailer! 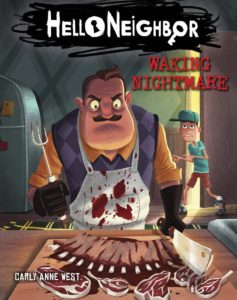 It’s been four months since Nicky Roth has seen his best friend and neighbor, Aaron Peterson. Aaron’s father, a reclusive theme park designer, told the town that Aaron and his sister Mya are living with a relative far away, but Nicky can’t seem to accept it.

Plagued by terrifying nightmares of robotic mannequins, rotting theme parks, and a dark basement, Nicky teams up with his friends from school to find out what really happened to Aaron and Mya. Together, they start piecing together a picture more disturbing than they could have imagined. The screams coming from the neighbor’s house can’t be nothing, and Nicky is determined to get to the bottom of where his friends went, and what-if anything-can be done to save them.

This pulse-pounding prequel novel to the hit video game Hello Neighbor includes two-color illustrations throughout, to help readers unwind the mystery at the heart of the game. 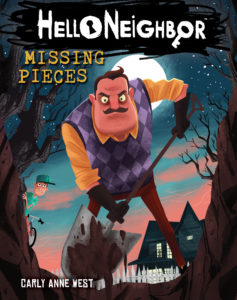 Nicky Roth has always been a lonely kid. But that all changes when he and his family move to Raven Brooks and meet their eccentric neighbors, the Petersons. Nicky befriends the Petersons’ son, Aaron, bonding over their talents for tinkering. Soon the boys are inseparable and using their skills to pull pranks on the townspeople.

But something about Aaron bothers Nicky–people seem almost afraid of him and his family. Through snippets from Aaron and a lot of sleuthing in the town’s archives, Nicky discovers a dark past haunting his neighbors, a streak of bad luck they can’t seem to shake. Aaron thinks that’s all behind them now, but Nicky has a feeling the Petersons are fated for another tragedy. . . .

This pulse-pounding prequel novel to the hit video game Hello Neighbor includes two-color illustrations throughout, to help readers unwind the mystery at the heart of the game. 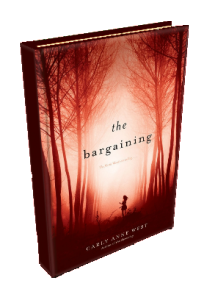 The fact that neither of her parents wants to deal with her is nothing new to Penny. She’s used to being discussed like a problem, a problem her mother has finally passed on to her father. What she hasn’t gotten used to is her stepmother…especially when she finds out that she’ll have to spend the summer with April in the remote woods of Washington to restore a broken-down old house.

Set deep in a dense forest, the old Carver House is filled with abandoned antique furniture, rich architectural details, and its own chilling past. The only respite Penny can find away from April’s renovations is in Miller, the young guy who runs the local general store. He’s her only chance at a normal, and enjoyable, summer.But Miller has his own connection to the Carver House, and it’s one that goes beyond the mysterious tapping Penny hears at her window, the handprints she finds smudging the glass panes, and the visions of children who beckon Penny to follow them into the dark woods. Miller’s past just might threaten to become the terror of Penny’s future….

PRAISE FOR THE BARGAINING

“The scary parts are truly terrifying, akin to old school Stephen King novels, not to be read before bedtime. Give to teens who claim they aren’t afraid of things that go bump in the night.” (School Library Journal)

“Teen horror aficionados will be happy to find a book that delivers on the chills they’re after.” (Booklist)

“Readers should be prepared to sleep with the light on after finishing this one.” (The Bulletin)

“Readers who enjoy spine-tingling horror with a twist of magical realism will enjoy this novel. The mystery of the Carver House is seldom predictable, keeping readers guessing what is behind the horrors of the North Woods far into the story line.” (VOYA)

Now available at your local or national retailer! 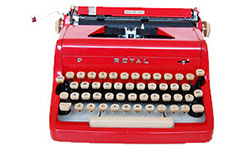 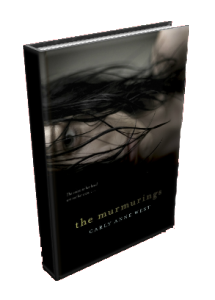 Everyone thinks Sophie’s sister, Nell, went crazy. After all, she heard strange voices that drove her to commit suicide. But Sophie doesn’t believe that Nell would take her own life, and she’s convinced that Nell’s doctor knows more than he’s letting on.

As Sophie starts to piece together Nell’s last days, every lead ends in a web of lies. And the deeper Sophie digs, the more danger she’s in—because now she’s hearing the same haunting whispers. Sophie’s starting to think she’s going crazy too. Or worse, that maybe she’s not …

PRAISE FOR THE MURMURINGS

“Satisfyingly disturbing.” (Bulletin of the Center for Children’s Books)

“This creepy debut has a supernatural mystery that readers will want to solve.” (Booklist Online)

“This atmospheric, paranormal chiller will appeal to fans of Stephen King.” (VOYA)

Now available at your local or national retailer!